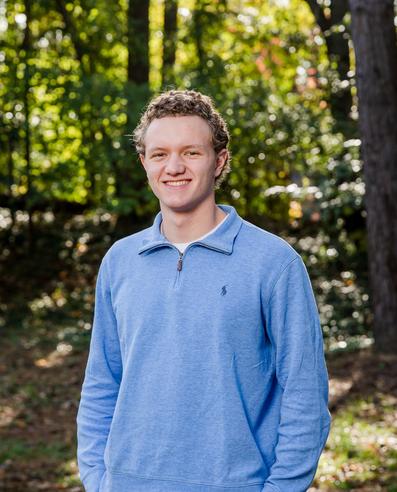 Born and raised in Atlanta, GA, Henry Halloran is a 2021 honors graduate of St. Pius X Catholic High School, where he took 11 AP courses and was on the President’s List all four years. At Pius, he was one of 24 students selected to be a Junior Lion Leader and a Senior Pride Leader, serving as a peer advisor and mentor to underclassmen. He served on the Student Athlete Advisory Board and the Student Government Association, as well as being a member of the National Honor Society. Additionally, Henry has studied piano for over 11 years, won the AP Music Theory Award at Pius, and has given yearly Christmas concerts at a local senior center. He has also participated in Sunday School, helped with Vacation Bible School, and been an acolyte at St. Martin’s Episcopal Church.

to present our 2021 CBSMF Scholar,

A three-time Scholastic All-American, Henry led the St. Pius varsity swim and dive team to two GA State Champion titles, individually winning two gold medals, three silver medals, and two bronze medals during his high school swim career. He was named to the Georgia All-State First Team, and was the Pius MVP in 2020 and 2021, as well as receiving the Coach’s Award in 2021. Henry also swims on the National Team at Dynamo Swim Club in Atlanta and has multiple Georgia all-state podiums and Junior National swim cuts. He has coached summer swim league for four years for the Hampton Hall Waves where, even though he cried at his first swim meet at age 5, he now shares his love of swimming with kids.

Henry will be continuing his academic and athletic career at Villanova University in Philadelphia, PA, this fall. He will be part of Villanova’s Division I Men’s Swim and Dive team and will be studying in the Villanova School of Business.